By integrating with Shopify you can:

To gain the most benefit from this integration, we recommend that you:

Note: The option to import a collection is a feature coming soon.

How to set up the Shopify integration

Set up import and sync

The steps you take now will affect whatever you import in the future, too. So, for example: If you import without prices, any product you add in Shopify later will also sync to iZettle without a price.

When you import your Shopify products, you have two options. You can choose to add them to your existing iZettle product library or you can replace all the products in your iZettle library with your products from Shopify.

We recommend that you replace your iZettle library with your Shopify library (unless you have a lot of products in iZettle you don’t want to have in Shopify).

If you add Shopify products to your existing product library, it will create duplicates if some products are the same.

If you replace your whole library but then change your mind, you can always undo the import and restore your iZettle products again directly after.

Note: If your product library in iZettle is empty, you will not see this option. 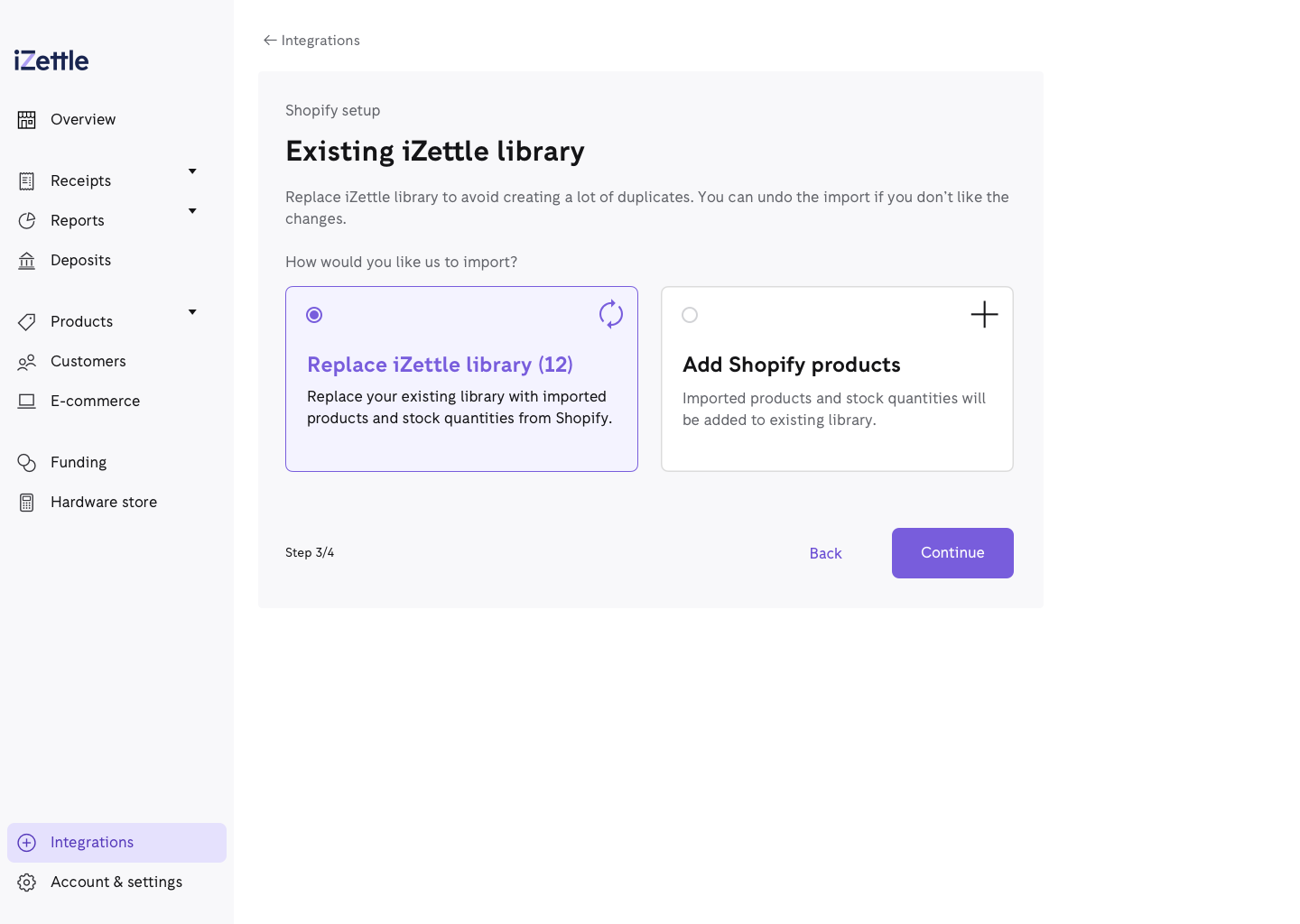 If your Shopify store and iZettle store have the same currency, you can choose to import prices for your products. Always edit prices in Shopify after importing them to keep them up to date in iZettle.

Don’t import prices
If the currencies don’t match in both your Shopify and iZettle stores, your products will be imported without prices.

If you import without prices, then you can actively set different prices for your iZettle products if you wish.

Note: If you have set your prices in Shopify excluding VAT, you will get a warning where we recommend that you don’t import prices. This is because prices in iZettle always include VAT.

VAT
VAT is not imported or synced from Shopify. All products will get your iZettle store default VAT when imported but you can change that manually in iZettle on each product. 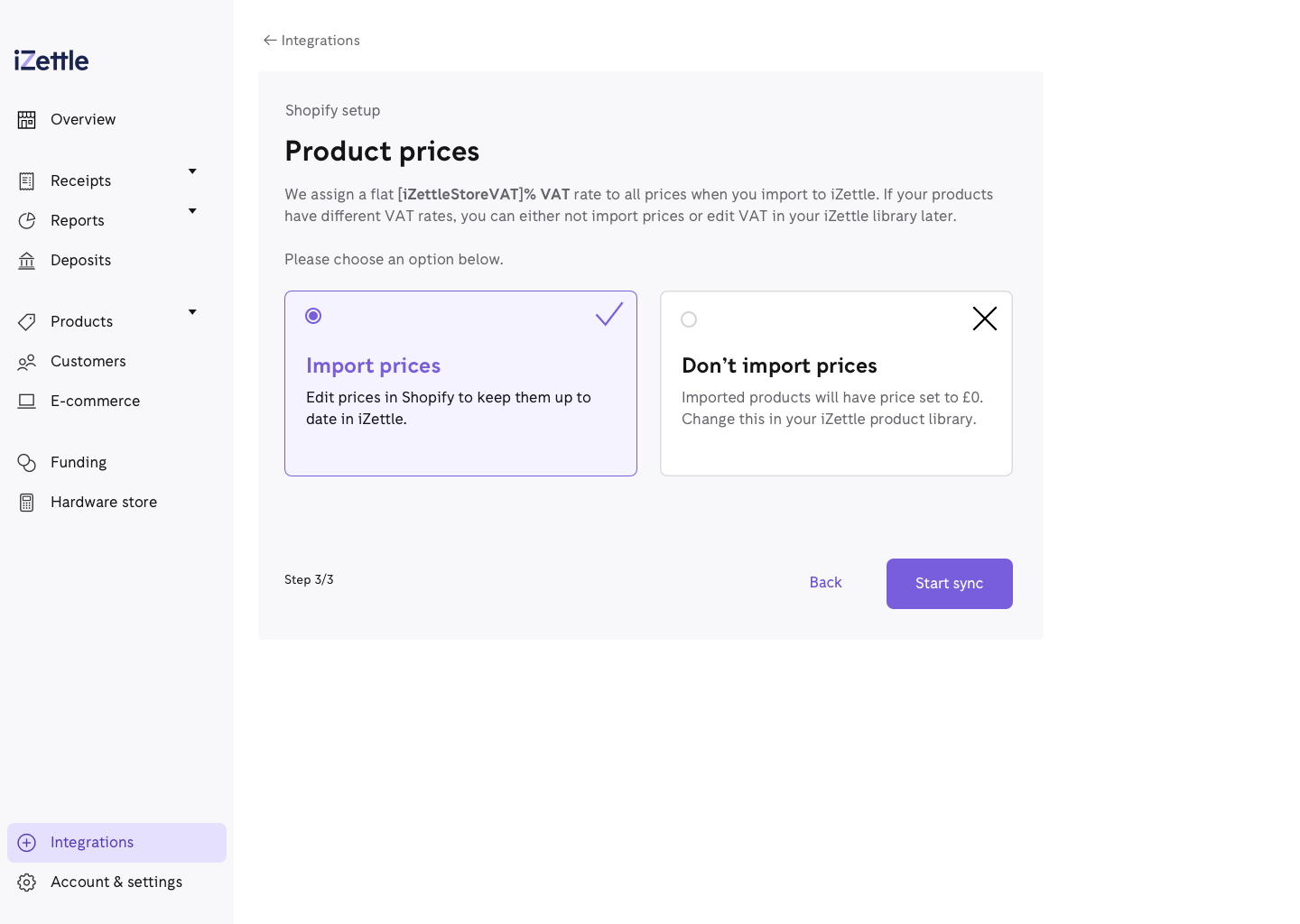 Important: Make sure you always update your products in Shopify as any updates you make in iZettle will be overwritten.

How to disconnect the integration

I’ve replaced my iZettle products but want them back again, how do I undo?
During the import and right afterwards, you can revert the changes by pressing undo in the green message visible in the setup and product list. Everything will go back to what it was before the import.

How can I remove all the imported Shopify products?
Just disconnect the integration and choose to remove all imported products. You can redo the setup again whenever you’re ready.

I got a lot of duplicated products after the import! How do I fix that?
If you have the same or similar products in Shopify and iZettle before the import, you will get duplicates. Disconnect the integrations and choose to remove the products imported from Shopify. Add any unique products you have in iZettle to Shopify and then set up the integration again, choosing the option to replace your iZettle product library.

The integration says setup is incomplete – what should I do?
You may not have completed every step to import your products. Click into the integration and complete the setup.

Can I export products from iZettle to Shopify?
No, we don’t support this at the moment.

What product information will and will not be imported and synced?

What is the difference between ‘Import from Shopify’ in the product list and this integration?
‘Import from Shopify’ allows you to import your products once but will not keep them up to date. This Shopify integration imports both your products and inventory levels and keeps them up to date continuously. Any change you make on product data in Shopify syncs to iZettle automatically. Any sale or inventory change you make in iZettle or Shopify syncs to the other platform.

You can find more information about the Shopify importer here.

How is my VAT handled?
iZettle assigns the default VAT rate in your iZettle store to all products imported from Shopify. If you sell products with different VAT rates, please make sure to update their VAT once the import is complete. Changes you make in Shopify or iZettle to VAT are never overwritten or synced, it is not part of the integration.

How do I add a product that I don’t want to sell through Shopify?
Add the product in iZettle and it will not be synced to Shopify.

What happens if I update a product in iZettle?
Any product updates made in iZettle won’t update your Shopify store. This applies to all products, whether they were imported from Shopify or not. The change you made in iZettle will also be overwritten the next time you update the product in Shopify.

I’ve updated my product in Shopify, when will I see the changes appear in iZettle?
Changes made in Shopify will update in iZettle almost immediately.

Some of my products haven’t appeared in my library, what can I do?
Find the product in Shopify and make a small edit (such as the name) to start the sync again, then check your iZettle library to see if the product has appeared.

If the product still doesn’t appear in your iZettle library, please contact support.

How do I know which products are imported from Shopify?
If you try to edit a product on your iZettle app or on my.izettle.com, a banner warning message will appear reminding you to edit the product in Shopify.

How do I hide products in iZettle that I have imported from Shopify?
You can hide products from the iZettle app by unchecking the point-of-sales option under sales channels, in the product detail page on my.izettle.com.

Can I disable inventory tracking?
No. With this integration, the inventory will always be synced between platforms.

What happens if I manually update the inventory in Shopify/iZettle?
Regardless of where you update your inventory, the update will be reflected in the other platform.

How does the integration manage multiple inventory locations from Shopify?
Currently, only your default location will be synced.

Was this article helpful?

Can't find what you're looking for?